PRAYER POINTS ON VICTORY OVER DARKNESS 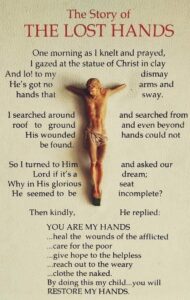 Spiritual Warfare: Arise, Fight, and Never Give Up!

“Finally, be strong in the Lord and in his mighty power. Put on the full armor of God so that you can take your stand against the devil’s schemes. For our struggle is not against flesh and blood, but against the rulers, against the authorities, against the powers of this dark world, and against the spiritual forces of evil in the heavenly realms.” – Ephesians 6:10-12

The Christian life is spiritual warfare. Many Christians are prone to overlook or minimize this; however, we cannot run away from the fact that we are in a war. The day we decided to become disciples of Christ we declared war against the kingdom of the devil and all his works in our lives and in our communities.

This war is real. We can either decide to fight or be defeated. Many of us are not experiencing any warfare because we have long been defeated and the enemy doesn’t bother us anymore.

The reason why spiritual warfare is so important is that
prayer is not only about talking to God; it is also about
defeating the devil and his evil plans.

The reason why spiritual warfare is so important is that prayer is not only about talking to God; it is also about defeating the devil and his evil plans. The devil has a ministry. His 24/7 ministry is to steal, to kill, and to destroy. The ministry of the devil is to war against the purposes of God in our lives and in our nations. His main calling is to make sure as many people as possible go to hell, including you and me. His mission is make people doubt God.

The Bible is full of accounts of spiritual warfare, starting from Eden and ending at the book of Revelations. The Bible itself is an account of the warfare between the kingdom of darkness and the kingdom of light. We as human beings are the objects of this warfare. It is a war for our hearts and our loyalty. We have been given the privilege and power of serving as agents in waging warfare against the devil.

However, we may not be conscious of the spiritual activity going on around us and in our communities and nations. We participate in this warfare through our prayers and witness. Let us look at one of the few examples of warfare in the Bible.

At that time I, Daniel, mourned for three weeks. I ate no choice food; no meat or wine touched my lips; and I used no lotions at all until the three weeks were over. On the twenty-fourth day of the first month, as I was standing on the bank of the great river, the Tigris, I looked up and there before me was a man dressed in linen, with a belt of the finest gold around his waist. His body was like chrysolite, his face like lightning, his eyes like flaming torches, his arms and legs like the gleam of burnished bronze, and his voice like the sound of a multitude. I, Daniel, was the only one who saw the vision; the men with me did not see it, but such terror overwhelmed them that they fled and hid themselves. So I was left alone, gazing at this great vision; I had no strength left, my face turned deathly pale and I was helpless. Then I heard him speaking, and as I listened to him, I fell into a deep sleep, my face to the ground. A hand touched me and set me trembling on my hands and knees. He said, “Daniel, you who are highly esteemed, consider carefully the words I am about to speak to you, and stand up, for I have now been sent to you.” And when he said this to me, I stood up trembling. Then he continued, “Do not be afraid, Daniel. Since the first day that you set your mind to gain understanding and to humble yourself before your God, your words were heard, and I have come in response to them. But the prince of the Persian kingdom resisted me twenty-one days. Then Michael, one of the chief princes, came to help me, because I was detained there with the king of Persia.” (Daniel 10:2-13)

This is a telling story about prayer and spiritual warfare. Daniel decided to seek God’s face in prayer and fasting. He prayed and fasted for many days; however, no response was coming. On the twenty-first day, the answer came through an angel who told him that the prince of Persia withstood the angel and delayed him. God had given an answer to Daniel from the very first day he started praying. The answer did not get to him until Michael came to help the angel to fight the prince of Persia who was the demonic prince over the kingdom of Persia. What would have happened if Daniel had stopped praying? His prayer brought help.

The devil’s ministry is to foil and destroy everything God is doing on earth. We are on earth, inside the enemy’s kingdom. Do you think the enemy sits down and blesses your work and ministry? No! He is in the business of doing everything possible to stop you. That is his goal. But we are victors because “Greater is he who is in us than he who is in the world!”

Who Are Our Enemies?
Ephesians 6:12 says, “For our struggle is not against flesh and blood, but against the rulers, against the authorities, against the powers of this dark world and against the spiritual forces of evil in the heavenly realms.” The Bible clearly says that we are not fighting against human beings, but against:

Principalities
Powers
Rulers of the darkness of this world
Spiritual wickedness in high places
The kingdom of the devil is organized. As we saw in the Daniel passage above, there was a demon called the “Prince of Persia.” Likewise, there are demonic princes over continents, nations, cities, and towns. The Bible says it is against them we are fighting. Their work is to make sure that the kingdom of Jesus does not get established in their dominions. Although they are invisible, they are real.

For though we live in the world, we do not wage war as the world does. The weapons we fight with are not the weapons of the world. On the contrary, they have divine power to demolish strongholds. We demolish arguments and every pretension that sets itself up against the knowledge of God, and we take captive every thought to make it obedient to Christ.

God has equipped us with spiritual weapons that are capable of:

Pulling down spiritual strongholds
Casting down evil imaginations
Casting down every high thought that exalts itself against the knowledge of God
Bringing into captivity every thought to the obedience of Christ.
Let us not deceive ourselves into thinking that we can win souls and get people into God’s kingdom without direct confrontation with these demonic forces. This is why prayer is so strategic. Through prayer, we harness the forces of God’s kingdom—his angels—to fight on our behalf.

This is one of the weak points of the Church in our generation. We have neglected fighting in prayer for our nations and our people. We easily give up and give in. We pray routine prayers that are dead and that do not make any impact on God’s work.

Radical, Violent, Passionate Prayer
There is something about fighting in prayer that is radical, violent, and passionate. It is a fight, not a joke. Read Matthew 11:12: “From the days of John the Baptist until now, the kingdom of heaven has been forcefully advancing, and forceful men lay hold of it.”

And God wants us to fight the devil and his demons. God does not give us the weapons of warfare (Ephesians 6:10-16) so we can just dress up and look like soldiers—only to run away when the war starts. He has given us those weapons so we can fight and win. He expects us to win.

“Submit yourselves, then, to God. Resist the devil, and he will flee from you.” – James 4:7
“Be self-controlled and alert. Your enemy the devil prowls around like a roaring lion looking for someone to devour. Resist him, standing firm in the faith, because you know that your brothers throughout the world are undergoing the same kind of sufferings.” – 1 Peter 5:8-9
“I have given you authority to trample on snakes and scorpions and to overcome all the power of the enemy; nothing will harm you.” – Luke 10:19
Some of the key words or phrases in these verses are:

Put on the full armor
Stand against the devil’s schemes
Struggle against principalities and powers
Prince of Persia withstood (opposed)
Weapons of warfare
Bind and loose
Take it by force
Resist the devil
Tread on
We should not be afraid of fighting this war. We are called and equipped to be soldiers of Christ. God has given us everything we need to win; he has assured us of victory, and those who overcome shall reign with Jesus forever. Therefore arise, fight, and never give up.

“The superficial results of many a ministry, the deadness of others, are to be found in the lack of praying. No ministry can succeed without much praying, and this praying must be fundamental, ever-abiding, ever-increasing.” – E.M. Bounds

Don’t forget to drop your comments below if you find these prayer points on victory over darkness helpful. Thanks and God bless you.