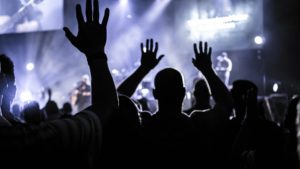 the pride of his face the wicked does not seek him;all his thoughts are, “There is no God.”His ways prosper at all times…  Psalm 10:4-5

God has given us a book of prayers in the Bible. The book of Psalms has prayers for every imaginable circumstance of life. We know that these prayers are pleasing to God because they are Scripture; they were breathed out by the Holy Spirit through the experiences of David and the other writers of these psalms.
When we feel that we need to grow in this holy art of prayer, the book of Psalms is the place to go. Today, as we come to Psalm 10, two things are very striking about this prayer: First, the wicked seem to be winning. Second, God seems to be far away.

Pray When the Wicked Seem to be Winning

There are 18 verses in this psalm, and 11 of them are given to a sustained description of the character and activities of the wicked:

v2 In arrogance, the wicked hotly pursue the poor;
v3 For the wicked boasts of the desires of his soul…
v4 In the pride of his face, the wicked does not seek him [God];
v5 [The wicked’s] ways prosper at all times;
v6 He says in his heart ‘I shall not be moved…’
v7 His mouth is filled with cursing…
v8 He sits in ambush in the villages;

There is no doubt what this prayer is about. It is all about wicked people.
It is about evil that seemed to David to be coming in like a flood. It is an outpouring of the grief and distress that a godly person feels when evil becomes rampant.
When David sees evil multiplying in the land, he takes time to lay out the problem before God. This is important when we are praying about the darkness that is in the world. Don’t rush over the problem. Spell it out before God in detail.
This is what you do when you share a problem with a friend. You sit down together over lunch and you tell the story—in detail. Do the same with God. Tell him the whole story.
David gives us a five-point profile of a wicked person. What does wickedness look like? What makes a person wicked?

Five-point profile of a wicked person

In arrogance the wicked hotly pursues the poor;  Psalm 10:2
The wicked boasts of the desires of his soul…  Psalm 10:3

The wicked person tells himself that he is completely secure in his position. He feels that the future is with him: “Throughout all generations I shall not meet adversity…” (Psalm 10:6). “The position that I have adopted is completely secure.” The wicked are always telling themselves that there is nothing to worry about.

The one greedy for gain curses…  Psalm 10:3
His mouth is filled with cursing and deceit and oppression;
under his tongue are mischief and iniquity.  Psalm 10:7

What’s in the heart comes out of the mouth in all kinds of cursing and lies.

The one greedy for gain curses and renounces the Lord.  Psalm 10:3
He lurks that he may seize the poor;  Psalm 10:9

This is how he is going to advance the purpose of his greed.

He lurks in ambush like a lion in his thicket;  Psalm 10:9

Maybe you know someone like this: Everything seems quiet and peaceful, but suddenly this person springs up and offloads, and they’re in a rage. You are left saying, “Where did that come from?”
The wicked person is volatile, given to sudden outbursts of rage. Unpredictable. Frightening. Destructive. Like the lion the wicked know that they have power and they always use it in a destructive way.

In the pride of his face the wicked does not seek him;
all his thoughts are, “There is no God.”  Psalm 10:4

I want you to notice something very important. There is a contradiction that lies in the heart of the wicked person:

Do you see the tension here? The wicked person cannot quite convince himself that there is no God. Derek Kidner describes this as the “inner dialogue” of a wicked person.
He keeps telling himself that there is no God. But no matter how often he does this, he can’t quite escape the sense of a divine being. So he resorts to an alternative argument.
This is what lawyers do in the courtroom when they’re failing. They resort to another argument: “He says in his heart, ‘God has forgotten, he has hidden his face, he will never see it’” (Psalm 10:11).
Take encouragement from this, Christian, when you are praying for people who are defiant towards God. There is an inner dialogue in the soul of the wicked. The Bible says that there’s no peace for the wicked. And this is why: There is a hidden battle going on inside over God.
“What if there really is a God?” Most of the time, the wicked manage to suppress this disturbing thought (Romans 1:18). But the wicked can never really escape this question, and here’s why…
Since the wicked are made in the image of God, and since they live in a world that was created by God, this is not easy to do. It takes a constant effort of mind and heart, because evidences of God keep springing up.
He has to keep saying “There is no God” to himself, because his heart within him and the world around him keep suggesting otherwise. So, here is a five-point profile of a wicked person: Proud, foul-mouthed, greedy, violent, and godless.
Whenever you see any traces of these things in your own heart, deal with them decisively. If these are the things that characterize the wicked, I do not want even a trace of them to be found in me.

Wickedness is not a new phenomenon, it only takes new forms

In one generation, wickedness is clothed in hypocrisy, in another generation wickedness is clothed in defiance. Once you see this, it will help you in praying through the issues of our day.
For many years it has been said that about a third of all Americans regularly attend a place of worship. That number today is 17%. 17% attend church at least once a month. That means 83%, the vast majority, are now outside the church.
Everything seems to be changing around us. And in one sense it is.
But at another deeper level, it’s exactly the same. In the last generation, more people were resisting God while sitting in a church. Today more people are resisting God, without ever bothering to show up in church.
John Calvin points out that when wickedness “breaks out like a flood” in a nation, the big temptation for believers is that we are shaken in our faith and that we fall into despair:
It tends greatly to lighten grief, to consider that nothing befalls us at this day which the Church of God has not experienced in days of old… We are just called to engage in the same conflicts with which David and the other holy patriarchs were exercised. i
If we take the Bible seriously, as opposed to being naïve moralists, there will be times when the wicked seem to be winning. Let’s not be naïve about evil, sin, and its power.
As Christians who have signed our statement of faith, we say we believe that men and women are born sinners, hostile to God, and dead in trespasses and sins. Do you believe that the default position of the human heart is antagonism toward God?
If so, why are we surprised when sinners want to sin? Sinners will always want to sin and they will constantly find new ways of sinning. This is the world in which we live, the world in which we suffer, and the world in which we bear witness.
Christians who understand this world learn to pray. The more we understand the nature of this world, the more we will not only pray, but we will long for the new heaven and the new earth, the home of righteousness, where sin will be no more.

Pray When God Seems to be Far Away

Why, O Lord, do you stand afar off?
Why do you hide yourself in times of trouble?  Psalm 10:1

There’s a fascinating turn in this psalm, almost as if thinking about the wicked awakens David to a renewed faith in God. David prays: “Why, O Lord, do you stand afar off? Why do you hide yourself?” God, you seem so far way, so remote, so uninvolved. You don’t seem to do anything!
At some point in the psalm it seems to dawn on David: “That’s what the wicked believe!” David says: “Why do you hide yourself in times of trouble” (Psalm 10:1)? The wicked say: “He has hidden his face, he will never see it” (10:11). I’m discrediting God. That’s what the wicked do!
It’s as if David says to himself, “Wait a minute… I’m saying the same thing as the wicked!” Something happens to David in the course of this prayer, and it happens to him as he is praying. He finds help. Strength and faith come to him as he prays.
The turning point of the psalm is when David wakens up to what is happening in his own soul: “The wicked discount God. That’s what I have been doing and that’s why I have become so discouraged! David, stop thinking like the wicked!”

Prayer Points To Get Out Of Debt