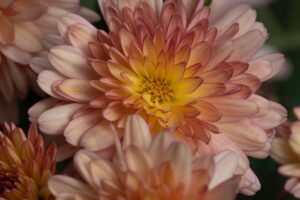 Now a woman, having a flow of blood for twelve years, who had spent all her livelihood on physicians and could not be healed by any, came from behind and touched the border of His garment. And immediately her flow of blood stopped.

In this year of Pentecost, God has been relating to us on the importance of our fellowship and total reliance on the Holy Spirit. We have also been exposed to the supernatural power that is made available to us to do great things here on earth by virtue of our relationship with the Holy Spirit. All these experiences describe what happens when a mortal man is divinely touched by God.

A divine touch is a heavenly touch, a transforming and power-giving touch that empowers an ordinary man to do the extraordinary. It’s a touch that gives a new identity to the touched. It is a touch that is different from the ordinary touch of a friend, a colleague or even a spouse.

In the book of Exodus when God decided to deliver the children of Israel from the hard bondage of pharaoh, He did so by many signs and wonders such that in Exodus 8:19, the Egyptian magicians confessed “This is the finger of God”(Exodus 8:19). Whatever the challenge you may be going through now or the hard bondage you are serving, a single touch from God will guarantee your total freedom and victory over that circumstance in Jesus name.

Jacob experienced a change in his identity in Genesis 32:24-28 when he wrestled with an angel all through the night and got touched in his hip. This change in identity translated Jacob into a higher realm of blessings such as he had not experienced before. He also gained confidence to face his estranged brother Esau whom he had dreaded facing up until that point in his life.

In 1 Kings 19, the Bible talks about the touch of God upon Elijah. He was discouraged and depressed, he wished he was dead. At that low point in his life, he received a touch from heaven (vs. 5). This touch of God empowered him and birthed a new dimension in his ministry afterwards.

In Mark 5:25-34, we see a woman in whom the heritage of sorrow manifested as an issue of blood for twelve years. She had suffered many things from many physicians. She had spent all that she had and was no better, but rather grew worse. Imagine the feeling of hopelessness and desperation. At this point in her life, only a divine touch could put an end to her years of agony and sorrow. Then one day, she came across the Great Physician, Jesus Christ. Her faith was so strong; she believed in her heart that all she needed from Him was a passive divine touch. She believed that based on the power in the divine touch, she did not need an active touch for her to be made whole. This singular act of faith was commended by Jesus Himself.

The bible abounds with examples of ordinary people who have experienced God’s divine touch in one capacity or the other. Additional examples include: The leper who was cleansed by the touch of Jesus (Mark 1:40-41), Bartimeus who received His sight instantly in (Mark 10:46) and the widow of Nain whose only son who died was restored to life by the touch of Jesus (Luke 7).

Whatever your case may be, it is never beyond the all-powerful, ever-transforming touch of God.

In a nutshell, the following are the effects of a divine touch in the life of any individual:

Healing of incurable diseases: (Matthew 8:2-3,14-15)
Change of identity (Genesis 32:24-28)
Restoration (Matthew 9:18-25)
Reversing the irreversible (Luke 7:11-15, Mark 10:46-52)
In order to experience the life-transforming touch of God, you need to be in a state of total surrender to His will and His plans for your life. Only in the acknowledgement of the supremacy of God’s power and His ability to transform your life will you be launched into a process of divine transformation that only He can grant. Confess and forsake your sins, invite Jesus into your life as you Lord and Saviour, release yourself to the Holy Spirit to help you overcome age-old habits and addictions by prayer and the study of God’s Word, and then you will begin to experience the touch of God in every aspect of your life.

Prayer Points On Turn My Bitterness To Sweetness

Prayer Points On From Labour To Favour